The Mary McClellan Foundation was originally created in 1989 to assist Mary McClellan Hospital in its mission to promote and support the health of the community it served.

The hospital was the vision of a singularly generous man, Edwin McClellan. Born in nearby Hebron in 1861, he grew up on his family farm near Lake Lauderdale. After graduating from Washington Academy in Cambridge, McClellan completed his education at Yale College in 1884. In 1898 he went to work for the Foster Milburn Company of Buffalo, makers of patent medicines. An ambitious young man, he went to London and opened a branch, Foster, McClellan Co., which prospered, selling its products throughout Europe. McClellan spent most of the remainder of his life in London.

In 1915, during one of his frequent trips to the family home in Cambridge, Edwin McClellan conferred with prominent community leaders about his plans to build a hospital here. His goal was to improve the quality of medical care available to local residents. He collaborated with his brother-in-law, New York City architect William Mynderse. Together they designed, built and furnished the new state-of-the-art hospital in three years. He named it after his mother, Mary McClellan. A nursing school, jointly operated with Yale University and Skidmore College, was also built on the grounds, and was operating by 1923.

In addition to paying for the construction of the hospital, Edwin McClellan left a generous endowment to support its ongoing financial needs. This allowed care to be provided to local residents at below its actual cost. After his death in 1924 McClellan’s widow continued this generosity by donating a large addition, the north wing. Other members of the McClellan family also made generous contributions to the hospital. 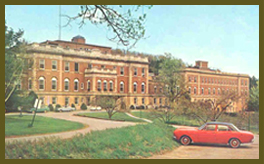 Over the succeeding years Mary McClellan Hospital became the most important medical facility in the region. Through the efforts of local residents it prospered, developed new services, and even grew in size. Two new wings were added, in 1966 and 1983, and a skilled nursing facility was opened in 1971. A group of outpatient facilities, the Family Health Centers, were opened in surrounding communities during the 1990’s.

However, trends in the delivery of medical care over the last few decades made it difficult for small rural hospitals to survive. Patients increasingly required the highly specialized care that could only be delivered at larger institutions. Each year Mary McClellan found itself transferring more and more patients to larger hospitals where they could take advantage of more advanced technology, and the specialists that practiced there.

Everyone associated with the hospital made a valiant effort to keep it open. But, with a decreasing patient census and increased cost of care, Mary McClellan Hospital eventually succumbed to the inevitable and closed its doors in 2003.

In 1989 the hospital Board of Directors created the Mary McClellan Foundation as an independent entity to assist the hospital in its mission. When the hospital declared bankruptcy in 2003 The NYS Attorney General’s office engaged in several years of litigation for the purpose of recovering money on behalf of the Foundation, and to obtain court approval for the transfer of other trust funds which formerly supported the Hospital.

In 2007 the dormant Mary McClellan Foundation was reactivated with a completely new board of directors and an updated purpose.

The Foundation makes grants to non-profit organizations that support the health care needs of the residents of southern Washington County and the Town of Hoosick. It will pay special attention to those needs that have increased since the hospital closed. In this way, the Foundation hopes to carry on the philanthropic work of Edwin McClellan.